Give us our daily bread! 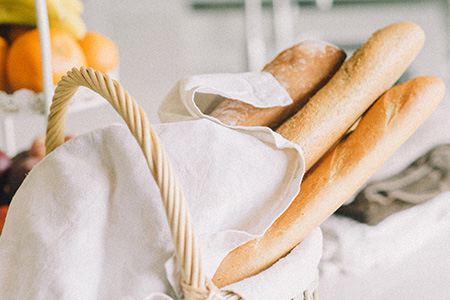 French bread is a serious business, bordering on a religion, shortages are what stirred the famous revolution. As such the baguette, could easily be considered the unofficial symbol of France.

Did you know that there is even a French bread law!

This states that traditional baguettes can only be made with four ingredients: wheat flour, water, salt and yeast, they can not be frozen at any stage or contain additives or preservatives! So yes they go stale within a day…..hence you see every French person make their daily trip to the boulangerie !

With over 30,000 boulangeries in France and 30,000 million baguettes consumed daily, you can understand that” la baguette “is very much part of our daily life.

Every meal will have bread in France!. Served for breakfast as a “tartine” with butter and jam and then dunked in a hot drink. And lunches and dinners will always have some sliced baguette on the table, no matter what you have ordered. Even for the “gouter” ( after school snack), French children will have a chunk of chocolate placed between two slices of baguette to sustain them after their long day in school.

However the best moment to eat a baguette, in my view, is when you are just walking out of the boulangerie with a warm baguette in your hand and you rip off the end, because you just could not wait to taste it!

Not often will you see us French folk eating in the street, it is deemed uncouth…..but for the sacred baguette, all is forgiven!